I woke up this morning and had to quickly get ready, eat breakfast, and pack my bag to take Jack to his medical appointment.  We decided to have Matt, Leah, and Molly stay at the hotel and rest while I took Jack.  I'm glad the girls were resting at home. It was crazy there! 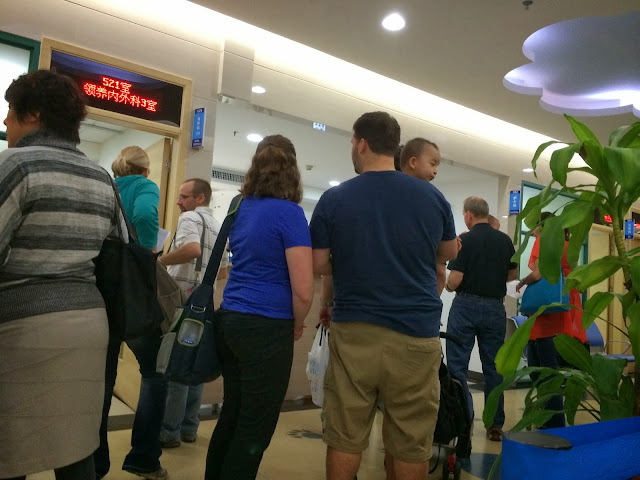 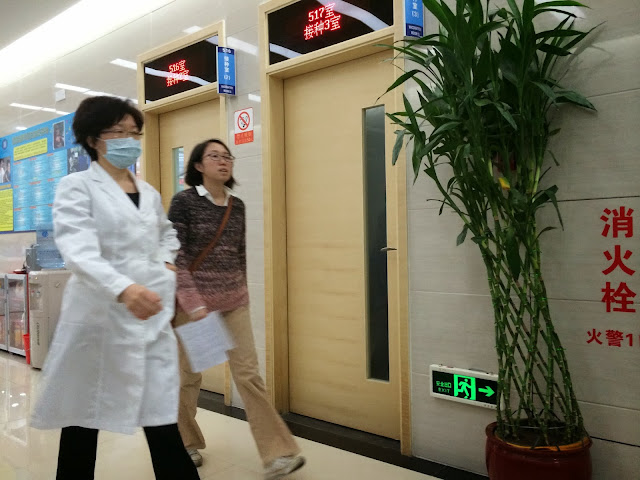 I know the kids were a little nervous there.  I was worried Jack would throw a big fit, but he did amazing!  I had to take his clothes off for part of the exam and he started getting upset.  The doctor said something in Chinese and he stopped fighting. Laid perfectly still.  What did he say to my boy?  As I was walking him to the different medical stations, he was gripping his legs really tight on me.  You have to wonder what was going on in his little mind during that time.


The doctor who did the general check said that something sounded not normal about Jack's heart.  We knew that heart/lung issues were a possibility because of his special need (a bone deformity in his chest wall) but I was sad to hear the doctor say that.  It was heavy on us today.  Once we get home, we'll have Jack evaluated and have a much better idea of what is going on inside his chest.  There are other things we need to talk to a doctor about - scrapes and scars that we don't know what they are.  A cough while he sleeps.  But the heart will be our biggest concern as we get him evaluated at home.


Sort of like the heart work God does when he adopts us into his family.  Our spiritual adoption isn't clean or easy. It's messy work.  But God draws us in, calls us his own, and takes on all of our heart problems.  He slowly works out our issues while holding us in his arms.  And we will hold Jack in our arms as we figure out what he most needs.... because he is ours. 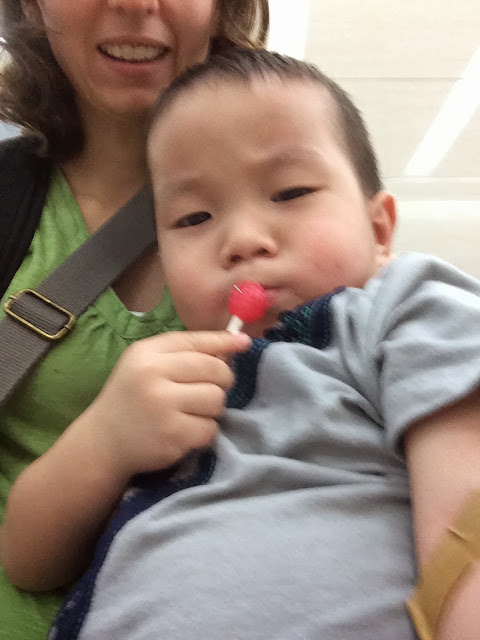 This was right after his TB test.  They take the kids into a room without parents to do this. It was hard for this mama to send her boy in that room!  But he did great and as soon as he came out, I had a lollipop ready for him.

We spent the rest of our day trying to recover from the crazy night last night and crazy morning this morning.  We covet your prayers tonight.  Our small room and just having been in China for so long is wearing on us. We are tired and we are being short with each other.  The girls have been SUCH troopers this whole trip but they are having to work hard to "keep themselves happy" (Molly's words) now.  I'd pay a lot of money right now for a home cooked meal and a drink with ice in it.
Posted by Matt and Lisa at 4:50 AM 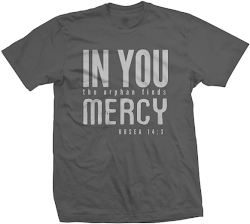